Rob Farkins 5 years at Bolitho comes to an end. 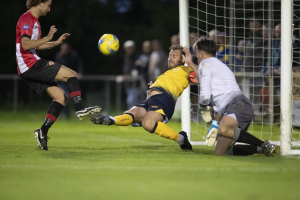 Plymouth Parkway can announce that Rob Farkins will not be with the club ahead of the 2021/22 Southern League season. The club would like to place on record their sincere thanks to the former Army football captain who joined the club back in September 2017.

Rob teamed up with manager Lee Hobbs back in 2017 and formed a fine partnership with Nick Milton at the heart of defence. It helped secure Parkway a SWPL title and see the club move into the Western League for the first time in Parkway’s history.

Now vice-captain, Rob finished 2nd in the first season of the Western League and was also a pivotal figure during the two curtailed seasons that followed.

The defender hit a memorable goal in the FA Vase that helped defeat West Auckland Town that secured another slice of Parkway history as they booked a place in the Quarter Finals of the competition for the very first time.

With the club now heading into the Southern League, we thank Rob for all his efforts over the past five years that played a part in the football club reaching its target.

A leader on the pitch, Rob was well liked off the pitch and the club are in no doubt he will be missed by many of the Yellow Army.

We wish Rob all the very best on the next part of his fine footballing journey and again thank him for all his efforts during his time at the club.